Save your €222m! There’s no place for Neymar & Hazard in same Madrid team 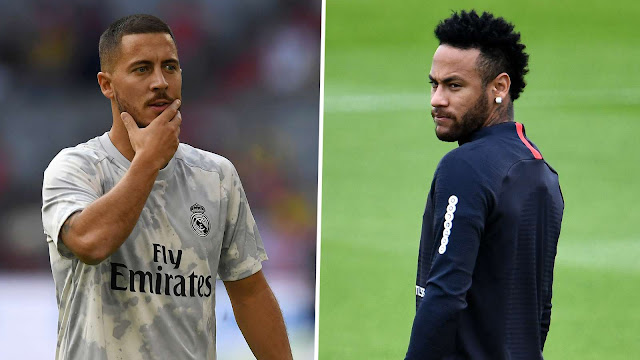 As Goal confirmed last week, the Blancos are in the running to sign the wantaway PSG forward - but where would he fit in at the Santiago Bernabeu?
Losing transfer tussles with Real Madrid has never gone down well in Barcelona.
The Catalans still blame what their official website describes as a "strange federative manoeuvre with Francoist backing" for their failure to beat their bitter rivals to the signing of Alfredo Di Stefano in 1953.
Luis Figo, meanwhile, has never been forgiven for swapping Camp Nou for the Santiago Bernabeu in the summer of 2000.
Indeed, the Blaugrana even blocked the retired Portuguese from representing the club in a UEFA-organised legends game ahead of the 2015 Champions League final in Berlin.
Consequently, seeing Paris Saint-Germain superstar Neymar move to Madrid rather than return to Catalunya would hit Barca hard.
"It would hurt if Neymar went to our eternal rival, especially after playing for [us]," midfielder Carles Alena admitted earlier this month.
The Brazilian's name was also chanted by fans ahead of last weekend's Liga Opener at Athletic Club on Friday night.
Not that Josep Maria Bartomeu needed any convincing. He has been the driving force behind the club's attempts to re-sign a player that departed in infamously acrimonious circumstances just two years ago.
Those wounds are still fresh. Legal action is ongoing. Bartomeu and the majority of supporters wants Neymar back, though. And Neymar wants to return.

There's one problem: PSG are willing to sell their wantaway superstar to anyone but Barca. Neymar's world-record transfer ruined relations between the two clubs. There is no trust between them.
Le Parisien even claimed at the weekend that Barca's interest in Neymar is a bluff, a smokescreen intended to do nothing other than pacify captain Lionel Messi, who would like to see his fellow South American return to Camp Nou.
Certainly, the decision to loan their most valuable bartering tool, Philippe Coutinho, to Bayern Munich, coupled with repeated denials that Ousmane Dembele is going anywhere, suggest that Barca might not be as serious about landing Neymar as we're being led to believe.
Conspiracy talk aside, though, it's clear that there are a number of obstacles on the Brazil international's path back to Catalunya. Madrid are, thus, hoping to take advantage of the current impasse.
Obviously, Neymar is an outrageously talented player, while landing Barca's primary transfer target would be immensely satisfying for Real and their supporters given the two teams' intense rivalry.
However, would it really make sense from a financial or sporting perspective?
Madrid need strengthening in midfield, not up front – and certainly not in Neymar's preferred position on the left wing, where Eden Hazard is set to play once he is fit to make his competitive debut.

Zidane is a long-time admirer of Hazard. He has been pushing for Madrid president Florentino Perez to sign the Belgian since 2009. It would be a major surprise, then, if, after signing Hazard from Chelsea for €100m (£91m/$110m), the coach now wants the winger to change position just to accommodate Neymar.
What's more, while we know from his time at Stamford Bridge that Hazard can play through the middle, he is far more comfortable and, consequently, effective out wide.
Of course, the idea may be to deploy Neymar as a No.10 in a 4-2-3-1, as PSG sometimes did, or even use him on the right flank.
But Vinicius Junior has already shown he is ready to be a regular starter, while Gareth Bale and his enormous salary are still on the Blancos' books.
So, it is not as if Madrid don't have options in attack. Even Luka Jovic, signed from €70m (£64m/$78m) from Eintracht Frankfurt this summer, is likely to spend most of the coming campaign on the bench, given Karim Benzema is enjoying a prolific resurgence up front.
And it is when you take the numbers into account that Neymar to Madrid really begins to look like an unnecessary risk on Real's part.
They have already spent more than €300m this summer – and yet not one of their new arrivals started Saturday's Liga opener at Celta Vigo.
With Financial Fair Play (FFP) restrictions in mind, can they really afford to spend up to put together a €200m package to sign Neymar, a player that they don't necessarily need?
The hope must be that the impressive 3-1 victory in Galicia, which was achieved with just 10 men, has soothed the sense of panic in Madrid after a depressing pre-season punctuated by poor performances and a succession of setbacks in their attempts to offload the likes of Bale and James Rodriguez.
Zidane was certainly striking a very different tone in his post-match press conference on Saturday.
Just a couple of weeks after saying the sooner Bale left, the better, the Frenchman was expressing his faith in the Welshman.

"I always intended to start him today, regardless of the injury to Eden Hazard," Zidane insisted. "Bale is staying. Everyone in the squad is positive and he is part of that."
So, too, it seems is James, who could even now sign a contract extension after seeing proposed moves to Napoli and Atletico Madrid come to nothing.
Madrid, then, are well stocked in attack, packed with players capable of shining on the game's grandest stages when fully fit and firing.
Of course, relying on Bale to stay injury-free for the entire season may seem perilous. But surely signing Neymar, who has spent a significant chunk of the past two seasons on the sidelines, would be far riskier?
In addition, it should be noted that Zidane couldn't rate Hazard any higher. He has even previously admitted that he prefers the 28-year-old to both Messi and Ronaldo.
Hazard's attempts to show why Zidane is such a fan of his work would be hindered, rather than helped, by the arrival of a man whose life now resembles a soap opera.
Madrid don't need any more drama. They need stability, someone they can rely on.
Article continues below
Amusing as it would be for Real fans to sign a former fan favourite at Barcelona, Neymar is not that someone.
Madrid never regretted signing Di Stefano or Figo, two priceless, era-defining superstars.
However, as PSG have discovered to their considerable cost, Neymar is more trouble than he's worth.
Sports