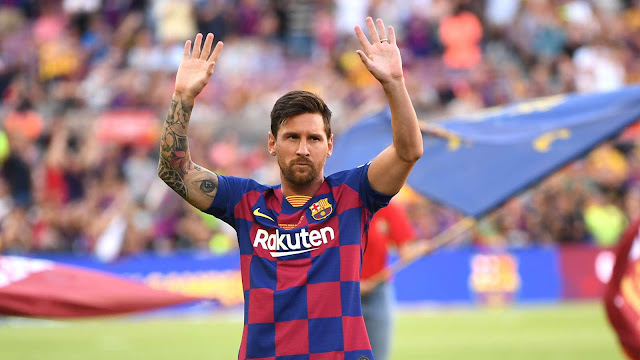 Norwegian third-division side IK Junkeren have signed Lionel Messi - a 16-year-old footballer that's recently changed his name to that of his idol.


Previously known as Daniel Are Knutsen, the attacker made the bold decision to name himself after the Barcelona star and had the name change quickly approved.
Boasting such a title, the teenager has vowed to do his best to live up to the hype and believes his style of play is similar to that of the Argentine's.
"I've had a plan for a while to change my name and I have Lionel Messi as my biggest idol. With my dedication to football, it made sense to try," the Norwegian Messi told VG .
"I want to say that I try my best to play like him. Some similarities are certainly possible to see, but the talent is probably not as great.
"I have quite similar ball control and some speed.
"Those who know me from before still use the old first name, while new ones might call me Lionel or Leo."
Knutsen, or Messi as he's now known, still has a long way to go to reach the level of his idol and will start off playing for Junkeren's G16 side, not their first-team.
While unlikely to have an immediate impact on the pitch, Messi is still undoubtedly Junkeren's most eye-catching signing and they aren't ready to stop there.
"I joked earlier that we have to look for Cristiano Ronaldo now," Junkeren general manager Runar Bo Eriksen said.
"We know that there is a Ronaldo in the transfer market who has previously played at Fauske/Sprint, so we know he is out there."
Junkeren compete in Norway's third tier having been promoted from the fourth division in 2010 when they won the league title.
The original Messi, meanwhile, is poised to play his first game of the seasonafter overcoming a calf injury that saw him miss Barcelona's La Liga opener against Athletic Bilbao.
In his absence, the Catalans stumbled to a shock 1-0 loss and will be hoping to find their feet against Real Betis on Sunday.
Barcelona claimed the La Liga title with ease last season, finishing 11 points clear of Atletico Madrid.
Sports