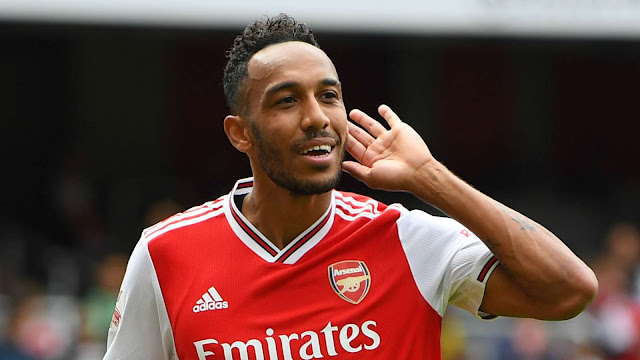 Liverpool coach Jurgen Klopp will be hoping former Borussia Dortmund player Pierre-Emerick Aubameyang doesn't come back to haunt him on Saturday night as the Reds welcome Arsenal to Anfield.


Klopp oversaw a key part of the Gabon attacker's development in Germanyafter signing him from Saint-Etienne in 2013 with Aubameyang scoring a hat-trick on his Bundesliga debut.
While the duo have long since parted ways, the Liverpool manager is under no doubt about the Arsenal star's quality.
"It is four years since I worked with him," Klopp said.
"Everybody knows everything about everybody, that is how it is and there are no surprises.
"Auba has actually no real weaknesses apart from his fashion style.
“When we played them so far we could kind of defend him but it is never possible to do it 100 per cent properly because of the speed he has. It’s just difficult.
“We know that, we have to work with it, deal with it. We did it in the past, we have to do it again and create our own moments.”
Aubameyang's move to Dortmund six years ago proved key in turning the former AC Milan youth player into a true goalscorer, with Klopp revealing the role he played in his positional change.
“He played as a winger at Saint-Etienne at that time, we needed a number nine because Robert Lewandowski was leaving us,” he said.
“We thought long about it, then he came in and played on the wing. Later on we realised he is a really good central striker, a number nine as well.
“It was not immediate like this. He developed incredibly and became a goal machine and I have to say his finishing is incredible. Combine that with the speed and it is really interesting."
While Liverpool have started the Premier League season with consecutive wins, Klopp has stressed there's plenty of room for improvement.
Arsenal have also made a winning start to their campaign and the Reds coach is hoping his side don't rest on their laurels anytime soon.
"We know we can improve, but it's not about being perfect at the start of the season, it's about being ready, and we were," Klopp said.
"Now we work on being perfect. We may never reach it, but we work. There are a lot of positive things, but a lot of space for improvement, too. It's a team sport, and you have to work. Then let's play football.
"So far, so okay, not more. Now let's go again against Arsenal."
Sports