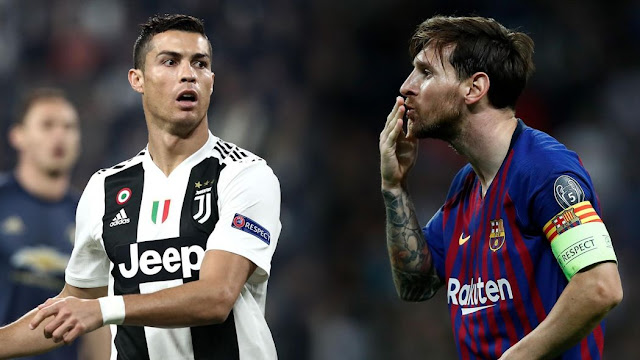 The Juventus star admits he has never been to dinner with his Barcelona rival but would have no problem doing so in the future
Cristiano Ronaldo has admitted that both he and Lionel Messi have benefitted from their long-running rivalry.
Ronaldo and Messi have been at the top of the sport for more than a decade, winning 10 straight Ballons d'Or between them before their run ended with Luka Modric picking up the top individual prize in 2018.
The pair were also La Liga's headliners for nearly a decade, with Ronaldo starring for Real Madrid between 2009 and 2018 before he made his move to Juventus.
That span saw Barcelona claim six league crowns to Madrid's two, while Ronaldo and company held the edge in Europe with four Champions Leaguecrowns to the two won by Messi's side, though Barca had claimed a win in the final against Ronaldo's Manchester United prior to the Portuguese star making the jump to Spain.
It all made for a heated rivalry, but Ronaldo says there is plenty of admiration between the two and believes that both players understand that they have helped each other reach record-breaking heights.
"I really admire the career he has had so far and, for his part, he has already said that he had trouble when I left the Spanish league because it is a rivalry that he appreciates," the Juve forward told Portuguese channel TVI.
"It is a good rivalry that exists in football, but this is no exception. Michael Jordan had rivals in basketball, Ayrton Senna and Alain Prost were great rivals in Formula 1, the only common point between all the big rivalries in the sport is that they are healthy.
"Messi makes me a better player and vice versa"
And, while the rivalry between the two superstars has often been viewed as a testy one, Ronaldo classified it as "excellent" and says he would have no issue sitting down to dinner with Messi at some point in the future.
"I have an excellent professional relationship with Messi because we have been sharing the same moments for 15 years," he said.
"I have never been to dinner with him but why not in the future? I would have no problem with doing that."
Sports