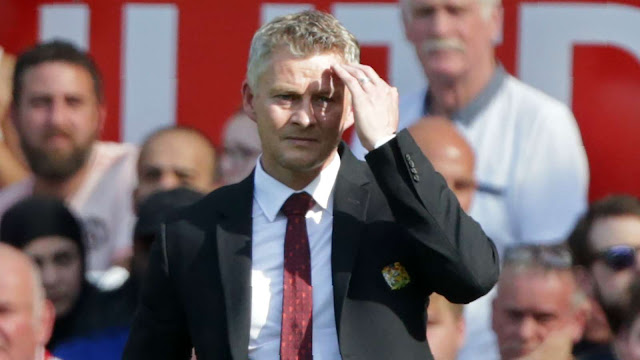 Ole Gunnar Solskjaer's side have looked to play on the counterattack this season, but the Eagles showed just how they can be beaten at Old Trafford

1) Palace reveal the blueprint to take down Solskjaer's Man Utd

You could see the problem coming a mile off.
Ole Gunnar Solskjaer is placing tactical emphasis on speed and directness to emulate the kind of attacking waves that characterised Manchester Unitedwhen he played under Sir Alex Ferguson in the 1990s, even though the modern game of attack-versus-defence, of possession-versus-counter, is tactically completely different to the first great Fergie era.
Crystal Palace inevitably sat in a deep formation to limit the space in behind, which, inevitably, limited Marcus Rashford, Daniel James, and Anthony Martial.
This was a game for a craftier playmaker, and yet not only was Juan Mata given just five minutes, but Paul Pogba sat deep alongside Scott McTominay. Pogba should have been freed to play higher up the pitch, rather than attempt to dictate the tempo from in front of Palace’s 4-5-1.
Overall United simply lacked urgency, failing to realise that a fast start is crucial against Palace’s frustration tactics; Jesse Lingard was anonymous, and the Rashford-Martial link just does not work when there is no space in the left half-space - where Rashford had chiefly played against Wolves.
Things improved slightly when Rashford was moved into the number 10 role, but not enough, and Palace deserved their win, creating, in the process, a template for the rest of the bottom-half clubs to follow.

2) Emery's tactics not to blame for Arsenal's loss at Liverpool

Unai Emery’s narrow 4-4-2 diamond took everyone by surprise at Anfield, and though Liverpool ultimately blew them away, it was a commendably brave – and interesting – approach.
The formation left enormous patches of grass for Trent Alexander-Arnold and Andrew Robertson, who attempted 23 crosses in total, to run into, and indeed it was the young right-back’s freedom to pass from the right wing that led indirectly to the first two Liverpool goals.

Above: Alexander-Arnold (top) and Robertson all touches vs Arsenal
However, Arsenal arguably got their tactics right - as right as possible, that is.
By playing so narrowly they largely nullified Mohamed Salah and Sadio Mane in the first half, drew the full-backs so high that Nicolas Pepe and Pierre-Emerick Aubayemang had two-on-twos, and comfortably dealt with every cross thrown at them – until sloppy marking from a corner broke the deadlock and changed the narrative.
What’s more, while many pundits criticised Arsenal for relentlessly trying to pass out from the back, their dangerous approach was intentionally vulnerable; Liverpool were encouraged by the visitors’ apparent recklessness and continued to press high, creating space on the counter for Pepe.
High-risk passing in your own third is a staple of Emery tactics, drawing the opposition out for quick transitions into the final third. It very nearly worked, too, even if ultimately the gulf in quality between the two sides showed.
Liverpool were superb, and in that kind of form would have beaten anyone in the world. Emery’s tactics were deliberately dangerous, and Arsenal deliberately conceded territory. It was odd, yes, but perhaps the best plan Arsenal could have used.

Mauricio Pochettino was made to pay for leaving his two most creative playmakers - Giovani Lo Celso and Christian Eriksen - on the bench for a match against ultra-defensive opponents in Newcastle.
Tottenham badly missed their ability to work in tight spaces and break through a compact defensive shell, and by the time they were introduced in the 62nd minute, neither player was capable of changing the rhythm of a match already firmly set.
Pochettino’s initial tactics were a mistake, too. Heung-Min Son and Lucas Moura attempted to stretch the pitch by hugging the left and right touchline respectively in a 4-2-3-1, but against Newcastle’s wing-backs they did not stand a chance of finding space.
Time and again Spurs moved the ball slowly back and forth, eventually working it wide – and thus into a cul-de-sac. Steve Bruce’s wing-backs are able to come out of the back five to close down a winger safe in the knowledge they are covered by the outside centre-back, and consequently attempting to penetrate the flanks was never likely to work.
Spurs switched to a 4-4-2 in the second half, and yet Son (now on the right) was still too wide. By the time Lo Celso and Eriksen took the field and, still in a 4-4-2, Lo Celso and Son began drifting inside into the half-spaces, it was too late; Newcastle were confident and deservedly held on.

Aston Villa’s primary tactical approach at Villa Park this season will be to play assertively, with focus on bursting forward in numbers, using overlapping full-backs, and taking quick set-pieces; the aim is to blow opponents away by capitalising on the raucous atmosphere inside the stadium.
It’s still a work in progress – Villa are struggling to build possession out from the back, with Tyrone Mings hitting 16 hopeful long balls – but against Everton, Dean Smith’s side were considerably tactically improved.
Having lacked guile in the final third against Bournemouth, Jota’s selection - in place of Anwar El Ghazi - gave Villa more subtle creativity on Friday while new right-back Frederic Guilbert replaced the piercing runs made by El Ghazi.
Jota and Guilbert combined for Villa’s opener, a move instigated by Jack Grealish’s quick free-kick – a deliberate tactic encouraged by Smith. The Villa manager spoke after the game of picking Jota to “cause problems” against Everton’s high line, which is exactly how Wesley opened his account.
But Villa’s sharp attacking football was particularly effective because Morgan Schneiderlin and Andre Gomes are so flat-footed; Gomes was dribbled five times on Friday, including being nutmegged by El Ghazi for Villa’s second goal.

Above: Andre Gomes duels lost vs Aston Villa
Sluggish and reduced to fearful sideways passing, Everton’s midfield pair were clearly targeted by Smith and his insistence on frenetic counter-attacks.

Nobody was surprised to see goals at Carrow Road on Saturday. Norwich and Chelsea are both expansive on the ball, but off it both engage in a form of pressing that is not synced enough to function effectively.
Chelsea, without N’Golo Kante, deployed a three-man midfield with both Ross Barkley and Mateo Kovacic pushing ahead of an isolated Jorginho.
Against Norwich’s attacking 4-2-3-1 - in which Todd Cantwell, Marco Stiepermann, and Emiliano Buendia roam freely in the number ten space - it would have made more sense for Kovacic to sit in alongside Jorginho, but instead he pressed Norwich’s deeper midfielders.
Barkley did likewise, essentially meaning Chelsea’s midfield simply applied pressure to the nearest man, rather than cut off spaces or act as a collective. The defensive line did not push up to help the press, nor did the midfield show any togetherness in their actions.
Individualism in the press also plagued Norwich’s performance. Neither sitting back nor pushing up together, those onrushing midfielders - acting alone - opened up huge spaces between the lines of defence and midfield for Mason Mount, Barkley, and Christian Pulisic to create chances.
Both teams need to work on their off-the-ball shape.
Sports