Kylian Mbappe ruled out for four weeks with hamstring injury 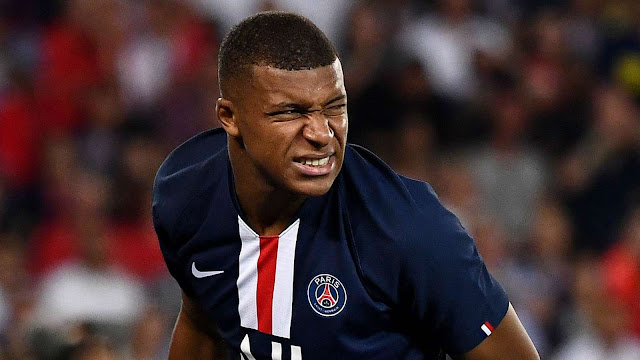 The 20-year-old was one of three PSG players to be taken off injured against Toulouse on Sunday and is expected to be sidelined for a month
Paris Saint-Germain have confirmed Kylian Mbappe will be out for around four weeks after he suffered a hamstring injury on Sunday.
The 20-year-old attacker's 100th appearance in Ligue 1 ended prematurely as he was forced off in the second half of the 4-0 win over Toulouse at Parc des Princes.
He was the third PSG player to have to go off injured in the match, with Edinson Cavani taken off in the early stages of the game, while Abdou Diallo was replaced by Thiago Silva in the first-half.
And PSG have confirmed that Mbappe will be out for around a month after having tests on his injury.
"Kylian Mbappé injured his left hamstring yesterday," a statement on PSG's website read.
"This morning's tests confirm an absence of four weeks depending on the recovery."
Cavani was revealed to have suffered an adductor injury as he pulled up after just 11 minutes against Toulouse and was replaced by Eric Maxim Choupo-Moting, who went on to score twice.
Scans on the Uruguayan's hip showed his injury is slightly less severe than Mbappe's, however, as he is expected back a week earlier than his team-mate.
"Cavani, who also injured during Sunday night's game at the right hip, had an MRI scan this morning," PSG's statement added. "The recovery time will be refined in the coming days but is not expected before three weeks."
Meanwhile, Diallo has received some positive news as the examination on the 23-year-old centre-back's eye injury was "reassuring".
The reigning Ligue 1 champions are still without Brazilian star Neymar, who has been left out of the squad for all three games so far amid constant links to a move to Barcelona or Real Madrid.
Coach Thomas Tuchel said in the build up to Sunday's clash that Neymar can return to the team once his situation is solved and reiterated after the game that he wants a swift resolution.
"Leonardo knows that I want to keep him," Tuchel said. "But that doesn't depend only on him. The situation is not very clear, yes. And we must clear it up."
PSG's next game is away to Metz on Friday before the start of the international break.
Sports