It is Impossible for Hazard to reach Ronaldo levels at Madrid 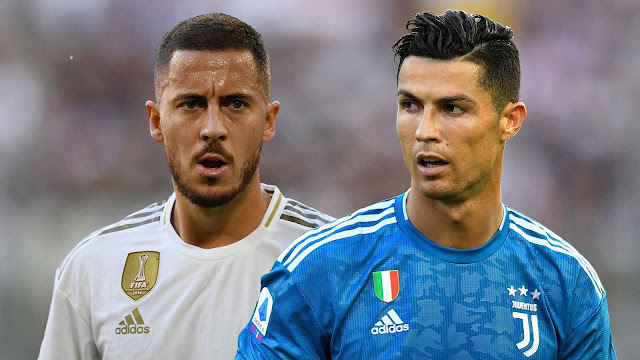 Predrag Mijatovic does not think Eden Hazard is capable of achieving the same levels of performance as Cristiano Ronaldo at Real Madrid.


The former Chelsea winger completed a big-money switch to the Bernabeu in the summer and is expected to play a key role for Zinedine Zidane's side as they look to improve on a disappointing 2018-19 campaign.
Replicating Ronaldo's impact during his time at Madrid will be a tough ask, however, with the Juventus star having scored an incredible 450 goals in 438 games in all competitions for Los Blancos.
Madrid won that game 3-1 despite a red card for Luka Modric, while they followed that up with a 1-1 home draw with Real Valladolid to leave them in third place in the table after two matches.
With Goal having learned that Hazard is due to be sidelined for up to four weeks, he is likely to be absent again for the club's next match against Villarreal before a possible debut after the international break against Levanteon September 14.
And, while Mijatovic believes that the Belgian is one of the best players in the world, it will be "impossible" for him to have the same impact as Ronaldo in the Spanish capital.
He told Goal: "Hazard is a very good player, for sure. He is one of the best players in Europe. But, in my opinion, we can’t expect him to do what Cristiano Ronaldo did. In my opinion, it's impossible - there is no player who can play like Ronaldo."The pressure at Madrid is different to the pressure at Chelsea and you need some time to handle that."
Zidane will be hoping that the signing of Hazard in particular will help Madrid improve on their third-place finish from last season - a campaign made worse by the fact that champions Barca were 19 points ahead of them.
Madrid have already had a busy summer but, with the transfer window in Spain not closing until September 2, there is also the chance for further additions, with Neymar continuing to be linked with a potential switch to the Bernabeu.
And, speaking about his former side's prospects for the 2019-20 season, Mijatovic added: "It’s still a big team, with big players. The new players who came in, they have to adapt - that's normal at such a big club.
"This season probably won't be easy - it’s never easy at Madrid with the pressure. But I’m very optimistic that they'll compete for titles, this won't change."
Sports