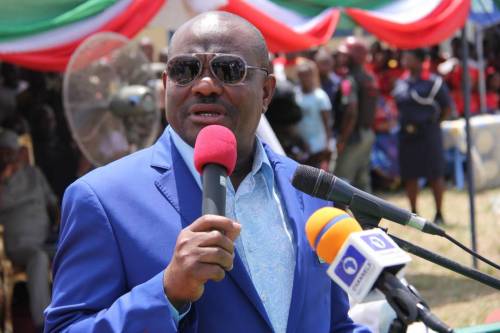 Rivers State Governor, Nyesom Wike has described as unfortunate information making the rounds that his administration demolished a mosque in Port Harcourt, the capital.


He said the report is false and was planted by mischief makers to create disaffection.
Addressing journalists at the location of the said mosque on Monday, Governor Wike said there was no Mosque on ground, hence nothing was demolished.
He said, “I received calls from several prominent Nigerians on the news being circulated online.
“It is most unfortunate that fickle-minded persons will claim that a mosque was demolished at this place, when no mosque existed here.
“The story was concocted by mischief makers to score cheap points.
“The truth is that people came here to erect illegal structures.  There was no approval from the state government for any structure to be erected here.
“The persons who started the foundation had already dragged the state government to court on the disputed land.
“The Rivers State Government won the case. What they attempted to do was to start the illegal construction to tie the hands of the state government.”
News