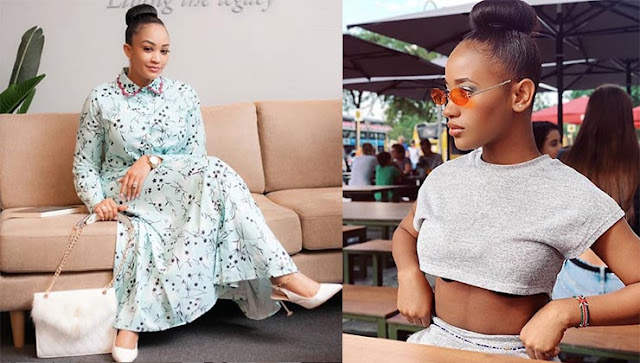 Who is fooling who is the question at hand. Diamond’s ex, Zari Hassan seems to be utterly ‘obsessed’ with Diamond’s former alleged side chic, Viva Fabrica.

First, she was accused of being Viva’s secret stalker before slamming her haters on the same. However, just last month, she stepped out in cornrows, just days after Viva Fabrica did hers that way too.Now, her recent hairdo is an exact copy of Viva Fabrica’s. Just hours after Viva posted hers online, did Zari have the exact thing done for her too.
On her Insta page, Viva shared:


Hair tied up and a bun on top. The two would easily be taken for sisters who basically copy paste each other’s ‘thing’.
Well, Viva stepped out with hers first, and Zari followed. Therefore, it would be no lie that Zari is the stalker here.
She graced the hairdo as she paid a visit to the late Nelson Mandela’s Foundation headquarters. Vintage but classy was her pick for the day.

Fans have already taken note of the trend airing:

I just inspire and stay low! Dont want no drama so lets just say its another type of coincidence!

Am i the only one waiting for her (Zari) #DMXchallenge

And Viva’s response was: