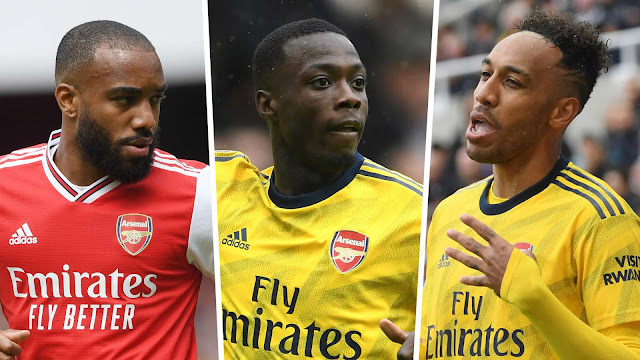 
The Gunners have assembled a star-studded cast of attacking talent at Emirates Stadium.
Transfer records have been broken in bringing proven performers on board, with that particular bar raised to £72 million ($88m) when acquiring Ivory Coast international Pepe over the summer.
He is being eased into the fold by Unai Emery, with Arsenal reluctant to go too gung-ho in their approach at this season, but a fearsome trident could be fielded at some stage.
If Arsenal do load their front line, then Merson believes they will have a forward unit to match that at Anfield of Mohamed Salah, Sadio Mane and Roberto Firmino.
The former Gunners star told the Daily Star ahead of a trip to Merseyside for Emery’s side on Saturday: “Arsenal now have a front three to rival Liverpool’s – and they have a chance to prove it this weekend.
“I think Alex Lacazette, Pierre-Emerick Aubameyang and Nicolas Pepe could score 60 goals between them this season.
“But Liverpool’s front three of Mo Salah, Roberto Firmino and Sadio Mane are the ones who set the bar, and they still have the edge.
“Those three are all proven performers in the Premier League while Pepe still has to prove himself over here.”

Merson added on a big-money addition at Emirates Stadium who is still waiting on a first Premier League start: “I know Pepe has yet to prove himself here but I think he’s going to be a big success. He looks a really good player.
“You don’t pay the kind of money Arsenal did for him if you’re not 100 per cent sure he is going to be a top player. It’s very rare players who cost that much end up being a dud.
“The thing about this Arsenal three is they have got tons of pace – but they have also got that calmness in front of goal.
“That’s unusual. When you’re lightning quick, you usually lack composure. Not these three. They all look like ice-cool finishers. That’s the difference.
“That’s why I think Arsenal will finish in the top four this season. They will still struggle defensively but with that firepower they can just outscore teams.”
Aubameyang has been leading the charge for Arsenal in 2019-20, netting in both of his outings to date, but Lacazette is also off the mark while on-loan midfielder Dani Ceballos has suggested that he could be another key cog for the Gunners this season.
Sports