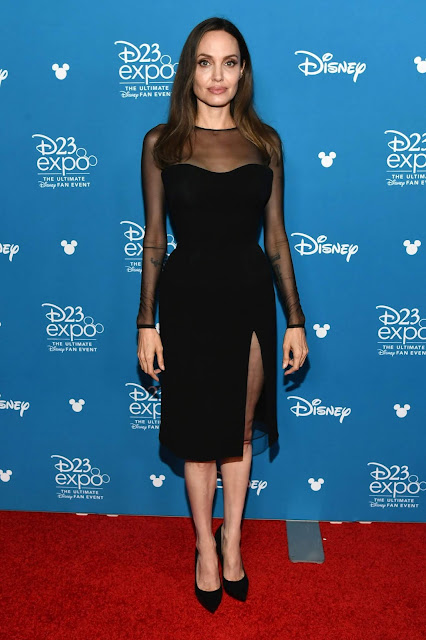 The Maleficent: Mistress of Evil star, 44, talked proudly to Us and other reporters about her 18-year-old at Disney’s D23 Expo in Anaheim, California, on Saturday, August 24.


“It’s hard but actually really exciting!” she said of her teenager leaving home and going to school in South Korea. “He’s ready and he’s so smart. And I’m so proud of him. And I’m excited. I’m excited about his choices.”
In an Instagram video earlier this week, the Oscar winner was visibly emotional and said she was saying she was “trying not to cry” as she and Maddox chatted with his new classmates at Yonsei University.
“I leave today, today’s the day I drop him off,” she explained in the video. “It seems like a great school.”
“I could see how much she cared for Maddox and his upcoming college life. It was a very special experience,” Maddox’s classmate Jo Won Bang told Us.
Maddox, who Jolie shares with ex-husband Brad PittOpens a New Window., is set to study biochemistry at the school.
Volume 90%
The actress, director and humanitarian, who also shares PaxOpens a New Window., 15, ZaharaOpens a New Window., 14, ShilohOpens a New Window., 13, and twins KnoxOpens a New Window. and VivienneOpens a New Window., 11, with Pitt, also spoke to reporters on Saturday about scaring one of her younger kids when she initially donned her horned Maleficent headpiece for the first film in 2014.
“I actually pranked my kids when I first did Maleficent and I scared one of my kids! And I’ll never do that again, she said. “I won’t say which kid it was but, I thought, when I had first put it on and they had never seen it, and I thought it would be fun to kind of, you know. But when you’re little, you don’t realize what mom means, to a kid.”
“I think that’s why Maleficent’s so scary, is because she’s a woman,” she continued. “So it’s almost like a mom. Mom means so much and when mom transforms into something that’s like a demon, it had a really bad effect and I had to kind of peel it off and take everything off in front of my kids to say, ‘It’s me! It’s me! It’s OK.’ And then they get used to it and then they were fine but one of them had a very, actually, I thought he was kidding but he wasn’t. He really didn’t like it. But then he got fine! But then it was fine.”
With reporting by Taylor Ferber
Scroll down to see more stars at D23.

The Younger star appeared at D23 on Friday, August 23, to reveal that she’s set to return to the role that made her famous — Lizzie McGuire — in a new Disney+ streaming series. “Lizzie is also a grownup,” Duff said. “She’s older, she’s wiser, she has a much bigger shoe budget. She has her dream job. She has kinda the perfect life right now.”
Credit: Richard Shotwell/Invision/AP/Shutterstock

The Pitch Perfect star unveiled the trailer for her new Christmas comedy Noelle, in which she plays Santa Claus’ daughter alongside Shirley MacLaine and Bill Hader.
Credit: Michael Buckner/Variety/Shutterstock

The newly married star hit the stage at D23 to promote the animated movie Onward, in which he and Spider-Man’s Tom Holland voice teenage elf brothers Ian and Barley Lightfoot.
Credit: Michael Buckner/Variety/Shutterstock

The actress promoted Star Wars Episode 9: The Rise of Skywalker at the expo on Saturday.

The Rock literally sailed onstage in a boat at D23 on Saturday to introduce the trailer for Jungle Cruise, which is out next summer and costars Blunt, who made a surprise appearance at the panel in a vintage car.
Credit: Michael Buckner/Variety/Shutterstock