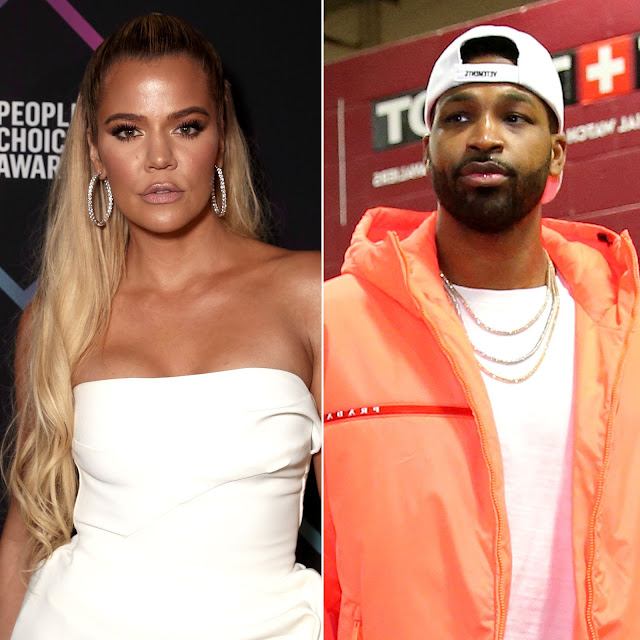 A backstab like no other. Tristan Thompson’s latest betrayal against his girlfriend, Khloé Kardashian, hit too close to home.
The basketball player made headlines on February 19 after he was caught cheating on the reality star with her sister Kylie Jenner’s best friend Jordyn Woods.

“Khloé is completely devastated,” a source exclusively revealed to Usafter the cheating scandal broke. “This is out of character for Jordyn and no one expected this to happen.”
The state of Woods’ relationship with the famous family remains up in the air in the wake of the infidelity. “At this point, the Kardashians aren’t 100 percent sure if Jordyn is going to be cut out of Kylie’s life. But they’re all looking at it as if she better be,” a second source told Us of the model, who has posed for Kardashian’s denim line and lived with the Kylie Cosmetics CEO before the controversy went down.
Added the insider: “It will be hard for Kylie to lose Jordyn because she’s her best friend. She doesn’t have a lot of friends and honestly can’t because of her lifestyle, so she has latched onto Jordyn.”
Although Jenner’s next move remains unclear, Kardashian’s camp is ready to bid Woods farewell. The Strong Look Better Naked author’s best friend, Malika Haqq, is horrified over the model’s behavior and “thinks Jordyn is disgusting and complete trash,” the second insider told Us. “Khloé is so upset and hurt and Malika is taking on the role of the ‘angrier’ one.”
This is not the first time that Thompson has betrayed Kardashian. In April 2018, the NBA star was caught cheating on the businesswoman with multiple women, just days before she gave birth to their first child together, daughter True.
Scroll down to find out more about Thompson’s latest cheating scandal, including when Kardashian confronted him and ended their relationship!

Kardashian and Thompson attended Woods’ 21st birthday party in Los Angeles in September 2018. Later that month, the athletic line designer exclusively told Us that the E! personality and the basketball player were a “fun” couple with “great chemistry.”
Credit: Getty Images (3)

Woods, who was previously linked to NBA player Devin Booker, shared a cryptic message about love via Twitter on February 17, hours before she and Thompson hooked up: “I could love you and still cut you tf off.”

After hanging out with Drake at SHOREbar in Santa Monica, Thompson hosted an afterparty and was spotted getting cozy with Woods. A source exclusively told Us that the pair “were all over each other” as partygoers were told not to snap cellphone photos.

Woods spent time with Jenner on February 18, just hours after she hooked up with the Cleveland Cavaliers player.

Kardashian confronted Thompson about the cheating scandal on February 18, according to an insider, and “he admitted to it.” She then ended their relationship.

Thompson seemed to deny the infidelity via Twitter on February 19 in a since-deleted post, writing, “FAKE NEWS.”

Kardashian weighed in on the debacle on February 19 by commenting with speaking head emojis on Hollywood Unlocked’s Instagram post about the controversy. Later that day, she was seen looking happy and calm while out and about in Los Angeles.

The Revenge Body host’s close friends, Malika Haqq and Larsa Pippen, supported her via social media by respectively commenting “STRONG FACTS” and “Amen!!!” on Hollywood Unlocked’s post. Haqq then addressed the scandal again on a meme about Woods, writing, “These hoes ain’t loyal.”

Thompson isn’t phased by his infidelity, a source exclusively told Us. “Tristan isn’t a manipulative person. He’s just a cheater and doesn’t care about anyone besides himself, his wants and his needs in the moment, explained the insider. “Tristan isn’t too worried about seeing True, or Khloé establishing new rules when it comes to coparenting. He doesn’t really care and was over it.”

Kardashian shared her thoughts about the situation via Twitter on February 20, liking a comment from a user that wrote, “@khloekardashian don’t let anyone ever say this is your fault! He is a sick man and if it’s true, then she is a terrible woman, both terrible people that do not deserve your love. TRUE does and ur doing great showing her that love.” As for Thompson, the athlete disabled his Instagram comments later on February 20.
Credit: Getty Images (2)

In wake of the controversy, Khloé shared a series of cryptic quotes on her Instagram Stories. One of them read, “Somebody needs to hear this….That betrayal was your blessing!!!” while another read, “the worst pain is gettin hurt by a person you explained your pain to.”
Credit: Courtesy Khloe Kardashian/Instagram

A source told Us exclusively that Khloé “feels so betrayed” by Thompson’s latest infidelity, adding, “This time it hurts even more because the person who it was with is someone who knows very much what Khloé has gone through in the past year. Jordyn is like part of the family.”

A day after Woods moved out of Kylie’s house, a source told Us that the model “feels terrible and her world has been rocked” after the Kardashian-Jenner family “completely cut her out of their lives.”
Credit: Mike Coppola/Getty Images for UNITAS

An insider told Us that reports about Woods and Thompson being involved prior to their party hookup are “not true,” noting that it “was the first time something happened between” the pair.
Credit: Getty Images (2)

A source told Us that Kylie initially defended her BFF, but later felt conflicted about the situation. A second insider put it more bluntly: “Kim is adamant about cutting her out. The whole family wants nothing to do with Jordyn.”
Credit: Michael Stewart/WireImage.com

The Good American cofounder thanked fans for their support a week after news of the cheating scandal broke. "Hi loves, wanted you to know that I appreciate you," she tweeted. "I’ve been reading your kind words and they really are a blessing to me. I love you! Thank you Thank you! I’ll be back when I’m in the mood to chat with you all. Until then remember to be kind to one another."
Credit: Matt Winkelmeyer/Getty Images

The former Kocktails With Khloé host liked a tweet about Woods that read, “She slept with Khloé’s baby daddy, and they havent even publicly said ONE bad thing about her, just unfollowed her, so how is that the Kardashians fault. Jordyn smeared her OWN name!”
Credit: Taylor Hill/FilmMagic; Paras Griffin/Getty Images for E11EVEN Miami and Bootsy Bellows

Us exclusively broke down the timeline of the phone calls between the Kardashian-Jenners, Woods and their friends after the hookup. Woods reached out to Khloé with a “preemptive call” to tell her that she went to Thompson’s party “to make sure none of the girls stayed over,” according to a source. Then Hollywood Unlocked’s Lee called Pippen to break the news of the tryst, prompting the Real Housewives of Miami alum to call Kim and Kourtney. Kourtney and Pippen then called Khloé, who confronted Woods. “Jordyn eventually broke down and admitted that the hookup happened,” the source said.
Credit: Joe Scarnici/Getty Images for InStyle; Phillip Faraone/WireImage; John Lamparski/WireImage

Us confirmed that Woods had once hooked up with Khloé’s ex James Harden. “That’s not news to [Khloé],” a source explained. “It wasn’t an issue at the time, but it does show now that Jordyn has a history of omitting facts and crossing lines.”
Credit: Lilly Lawrence/Getty Images; Matt Winkelmeyer/Getty Images; John Lamparski/Getty Images

Amid the scandal, the basketball player was spotted having dinner with a mystery woman at Carbone in New York City. He shared a photo on his Instagram Stories that showed a woman’s fingernails in the background before quickly deleting it.
Credit: Courtesy Tristan Thompson/Instagram

After Woods announced that she was set to appear on Jada Pinkett Smith’s Facebook Watch series, Red Table Talk, a source told Us, “It’s a little shocking she chose to speak to Jada before sincerely apologizing. Frankly, she still isn’t apologizing!”
Credit: Michael Simon/startraksphoto.com

Woods broke her silence on her hookup with Thompson on Red Table Talk, admitting that he kissed her as she was leaving the party. “[There was] no passion, no nothing. He just kissed me,” she said. “It was a kiss on the lips. No tongue … no making out.” Minutes later, Khloé fired back on Twitter: “Why are you lying @jordynwoods ?? If you’re going to try and save yourself by going public, INSTEAD OF CALLING ME PRIVATELY TO APOLOGIZE FIRST, at least be HONEST about your story. BTW, You ARE the reason my family broke up!”
Credit: Facebook

While Khloé initially called Woods the reason her “family broke up,” she backtracked in a series of tweets on March 2, 2019. “This has been an awful week & I know everyone is sick of hearing about it all (as am I). I’m a rollercoaster of emotions & have said things I shouldn’t have,” she tweeted. “Honestly, Tristan cheating on me & humiliating me, wasn’t such a shock as the first time.”

She added: “What’s been harder & more painful is being hurt by someone so close to me. Someone whom I love & treat like a little sister. But Jordyn is not to be blamed for the breakup of my family. This was Tristan’s fault.”
Credit: Getty Images (3)

Kardashian pal Larsa Pippen told Us exclusively that Khloé is “good” in light of the drama.
Credit: David Crotty/Patrick McMullan via Getty Images

After the KUWTK season 16 trailer showed footage of the scandal, Woods jetted off to London for a work event. She “actually timed her trip around when the Keeping Up With the Kardashians trailer dropped so she could distract herself and focus on the future,” a source told Us. “[Jordyn is] obviously mortified by the trailer, and her mom is upset about it too, but they expected it.”
Credit: Stuart C. Wilson/Getty Images; E! (inset)

Kris broke her silence on the cheating scandal during an appearance on On Air With Ryan Seacrest. “First of all, I pray about it,” the momager told Ryan Seacrest. “I really do. I find that, you know, just the spiritual side of me has to kick in because otherwise, you know, I feel like I wouldn’t survive.”

She continued: “As challenging as some of these situations are, I think that because [my kids] have one another and they try to make really good decisions, that they’re gonna come out the other side with a lot of clarity and a lot of honesty and do what they feel like is the right thing. And I really trust all of my kids to make those good decisions.”
Credit: Jason LaVeris/FilmMagic

Kylie shut down speculation that she cut the prices on her Jordy Lip Kit on purpose after Woods hooked up with Thompson. “This is just not my character,” the makeup maven told The New York Times. “I would never do something like that and when I saw it, I was like, thrown back. Jordyn knows I didn’t actually put it on sale.”
Entertainment