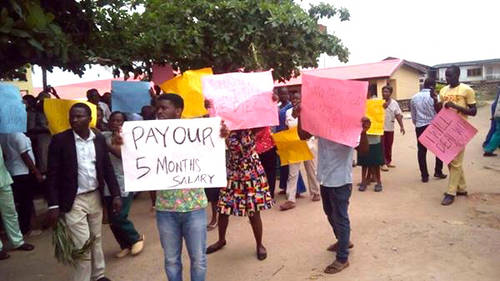 The national leadership of the Medical and Health Workers Union of Nigeria (MHWUN) has called on Nigerian President Muhammadu Buhari to pay the two-month salaries of health workers which the government refused to due to the strike action the workers took in April last year.


The union made their grievances known in Abuja on Wednesday when the  Accountant General of the Federation, Ahmed Idris, visited their national secretariat.
MHWUN National President Biobelemoye Joy Josiah said the “no work, no pay” stance of the government under which their salaries were withheld was a breach.
He said there no justice in the Nigerian government stance because other health workers who embarked on strike in November have not been paid according to reports reaching him.
Josiah said: “I want to use this opportunity to plead with you because of the position of the office you occupy. We know you can help us out.
“Prior to the elections, this union and the Joint Health Sector (JOHESU) were tempted to make the situation very restive during that period. This is because the Federal Ministry of Health unjustly seized the salaries of our member under the guise of ‘no work, no pay’.
“And then we ask: if no work, no pay is a law, on the other hand, the strike itself is also a law. So, if no work, no pay is a law, can it be bent for some persons in this federation?
“We are aware that some persons went on strike and the no work, no pay was issued and withdrawn. So, why should it be different for our own members, JOHESU members? Within the health industry, in November, last year, our members, medical doctors in LUTH, went on strike, just like we did in April and May, and they were paid.”
Health