Fulani Waging War Against Nigerians, To Drive People Away From Their Lands —Prof. Banji Akintoye 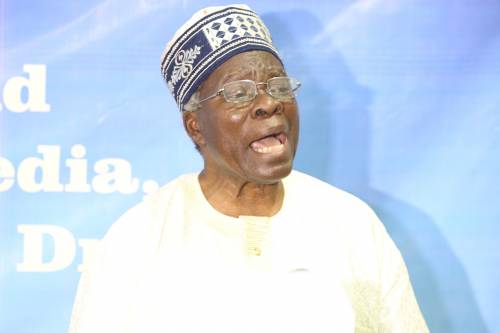 Foremost historian and a Second Republic senator, Prof. Banji Akintoye, has raised the alarm that Nigeria's Fulani ethnic group is waging a war against non-Fulani Nigerians.


He stated this in an interview with Nigerian Tribune.
Akintoye asserted: "There is a lot of noise concerning what is happening, what the Fulani are bringing to the South-west now. We must not give the impression that it is focused only on us; they are against all the peoples who are not Fulani in Nigeria and they have made their statement. They don’t hide their intentions. They say that their objective is to drive people from their lands and take them; that they would kill, maim, destroy and take the land of these people.
"As far as they are concerned, it is a war and some of their leaders are already saying that if there is a war, the Yoruba are the ones that would first run and things like that. It means they are already fighting a war and some of their leaders have been saying it."
The professor claimed that between 2013 and 2014 northerners were ready for war and the South was not.
"We are seeing the manifestation of all of that now. It is a war going on. It is no longer politics and the objective of the war obviously is what the Fulani themselves are saying," he added.
Containing, he pointed out: "I was in Benue State on January 5, 2018. I was part of a delegation sent from the South West to join a delegation from the South East, a delegation from the South-south and one from the Middle-Belt to go and commiserate with the governor and people of that state over the large number of Benue people killed on January 1, 2018. It was a large gathering.
"The governor had gathered leaders of his state to come and receive us. After our leaders had expressed their commiseration, the governor stood up and said, ‘Thank you. I need to let you know that what has happened to us is big; many villages have been destroyed, many people have been killed, but the people who did it are now saying that they are coming back’."
According to him, Governor Samuel Ortom brought out a letter written by the ethnic group which he allegedly received in December 2017, with the Fulani allegedly saying  they were coming because the state made a law to control open grazing.
"They came on January 1 and now they had written another letter to say they were coming back," Akintoye explained.
He added, "The letter says, ‘Mr. Governor, people of Benue State, we see that you are mourning, doing mass burial and so on, but what is happening to you now is a little thing compared to the bigger ones that are coming, and the problem your people have with us in Benue State is that all those Tivs and so on people believe that the land they have lived for thousands of years is their land, it is not their land, it belongs to us Fulani. And we are not talking of Benue State alone, we are talking of all the peoples of Nigeria and we will take the land, no matter what they do.
"We have accumulated weapons and monies for the war, we have asked the Fulani living in the rest of West Africa to come and join us to take our land from the people of Nigeria and we are ready to fight this war for years and years to come and if you think your federal government can help you, you are deceiving yourselves’. So, that is what is happening. It is not we who are putting war into their mouth. Some people say we should not talk like that; that we are stigmatising the Fulani. We are not stigmatising, we are just repeating what we heard from them."
News