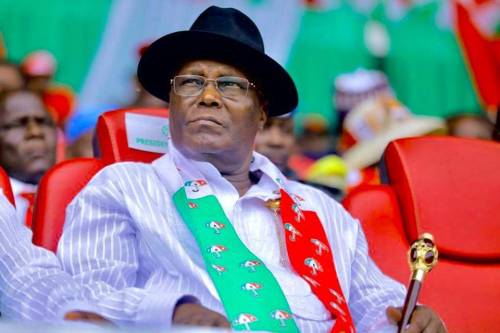 A plea by both Atiku Abubakar and the Peoples Democratic Party (PDP) asking the presidential election petitions tribunal to grant them more time to close their case has been turned down by Chairman of the tribunal, Justice Mohammed Garba.


This was after PDP lawyer, Chris Uche asked for more time, Channels TV reports.
Atiku and PDP have only called less than 100 of the 400 witnesses they planned to invite.
The tribunal stated that the hearing would go on with proceedings until later in the day to enable Atiku and PDP to close their case.
Earlier at the pre-hearing session, the tribunal granted the petitioners 10 days to conclude their case and the period expired on Friday (yesterday).
Meanwhile, the PDP lawyers had presented more documents to the tribunal on Friday to justify their petition challenging President Muhammadu Buhari’s victory at February 23, 2019, presidential election.
The documents presented by the PDP included an expert report of INEC’s electoral information systems as revealed by whistle-blowers website, downloaded documents from the website, certificate of compliance and executive summary for the 11 states under review.
However, lawyers to President Muhammadu Buhari and the All Progressives Congress (APC), however, objected to the admissibility of the documents with a promise to give reasons for their objection in their final address.
The Chairman of the tribunal, Justice Mohammed Garba, noted their objections but admitted the documents as exhibits.
The party also called its 59th witness, David Njoga, an ICT expert from Kenya who claimed to have obtained data from INEC server.
Under cross-examination, lawyers to President Buhari and the APC disagreed with the witness on the ground that the website where the witness obtained his data does not belong to INEC.
The PDP also tendered forms EC8 A and EC8 B which are the result sheets from seven local government areas in Kano State.
Lawyers to INEC, Buhari, and the APC objected to the admissibility of the documents.
The chairman of the tribunal, however, admitted the documents as exhibits having noted the objection of the respondents.
Politics