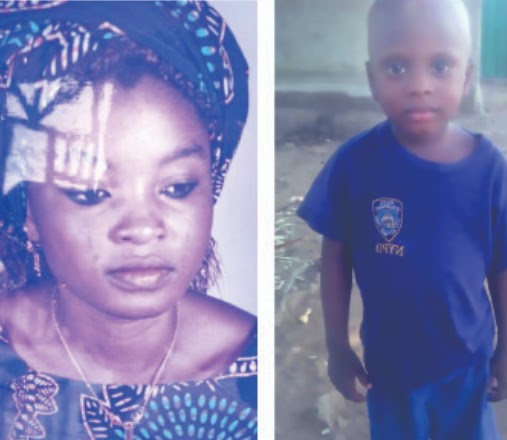 The Nasarawa state police command have arrested Mrs Grace Jacob Maisamari pictured left for killing her 4-year-old step grandson, Ritse Micah, on June 27th 2019. Grace threw Micah into a river over the hatred she had for her stepdaughter, Miracle Micah, Ritse's mother.

According to The Sun, Grace got married to Kapechi Micah in 2004 after the death of Miracle's mother in 2002. Ever since the marriage was contracted, Grace and Miracle have always had disagreements and constantly fought. Miracle lived with her son, Ritse, in her father's house.

The frosty relationship between both women took a drastic turn on Thursday June 27th when Grace decided to get at her stepdaughter by killing Ritse.

In her confessional statement to the police, Grace said her stepdaughter who is a 300-level Sociology student in the state university, never allowed her enjoy her marriage to Mr Micah and so she decided to deal with her.

On the day of the incident, Miracle had gone to school, leaving Ritse with his grandfather. Grace feigned traveling to another part of the state and decided to hide somewhere until her husband went out with little Ritse. She snuck back in and hid herself inside the room where the little boy normally sleeps. When her husband returned, he took little Ritse to the room and then retired into his own room. Grace came out of the place where she was hiding, carried sleeping Ritse and travelled with him in a vehicle she had already rented. She travelled from their house in Garagu, a community in Kokona Local Government Area of Nasarawa State, to Akwanga local government area in the state where she tied him up and threw him into a well where he died from Hypoxemia.

When asked what the little boy's offence was? Grace told the police that she had no problem with Ritse but that her grudge was with his mother who has been rude to her since she got married to her father.

“I decided to kill the innocent boy due to the attitude of his mother. After killing the boy, it dawned on me that I took the matter too far. I was restless but my anger against his mother’s attitude could not stop it from happening. Initially, I felt fulfilled and normal. I slept that night after the incident but the consequence of my action became clear after I was picked up by the police. I felt cold for the first time.
I don’t know what came over me but the mother of this boy is the major problem in my marriage. She has stolen my joy since I got married to her father, it has been from one problem to another,” she lamented

Recounting how she received the sad news of her son's demise, Miracle said she had just finished her examinations at the state university in Keffi when she got the call to come home immediately.

“I was in school. My heart was beating. It wasn’t okay with my spirit. So after my exams, I put a call to my father. On picking the call, we exchange greetings and he said we need to talk and he cut the call. After a short while, I called back and he said it was not something we can discuss on phone. He said I should come home. So I prepared and came down to Garaku from Keffi where I am schooling. On getting to my father’s house, some neighbours’ children welcomed me with the sad news of the death of my son.
My son doesn’t deserve such brutality at the age of 4. He is too innocent for any right thinking person to tie his legs and hands and dump him in the well till he died. I leave everything to God,” she said.

The distraught mother said she saw the early signs of her stepmother's illthoughts towards her son but ignored them. According to Miracle, her stepmother’s plan to get rid of her child started a long time ago. She recalled an incident that occurred last year in which her late son suddenly got missing from the house. But he was later found by a riverbank and returned home by a farmer the following morning.

“I went to buy some things for his school and he asked me to buy him bobo drink. But on getting home, he was nowhere to be found. We searched all around but to no avail, so we resigned ourselves to fate that night. We later reported the case to the police. But thank God, the following morning the boy was found at a river bank by a good farmer and brought back home.”

She said that few days after, her late son told her that it was her stepmother that took him to the riverside and threw him there to die.

“When my father came back from work, I told him, but he said it was a weighty allegation, adding that he didn’t want any trouble. He asked me to keep mute over the issue. But I told my brother about it.”

Miracle maintained that since Grace came into her father's life, herself, members of her extended family and even their tenants have not known peace.

“My mother died in 2002 and my father married my stepmother in 2004. But since she came, we have no peace in this house. She chased away all my father’s friends and relations. In this area, she is at war with everybody. He chased away all tenants from our house. There was never a good testimony about her. At a point, I wanted to take my son somewhere to school but my father prevailed on me to leave the boy here. I wanted to take him away because anytime I came home from school, neighbours would tell me about the maltreatments she subjects my son to. Severally, I complained to my father but he loves his wife and equally loves my late son. Therefore there was nothing I could do. He doesn’t want his grandson taken away from him. He always said he doesn’t want the boy to stay away. But now the evil person has taken him away and killed him.” she said

Grace is currently cooling her feet at the criminal investigation department of the Nigerian Police headquarters in Lafia and will be arraigned in court soon.
News