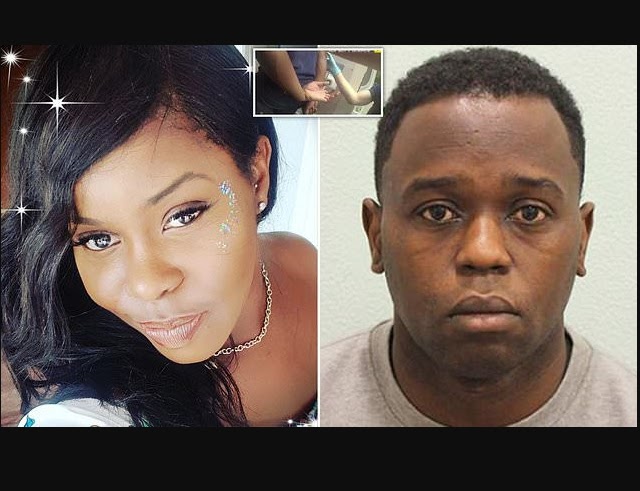 An ex-soldier who stabbed his Britain's Got Talent star girlfriend 70 times because she would not have sex with him has been jailed for life.

41-year-old Desmond Sylva who was found guilty of murder last month of brutally attacking his girlfriend Simonne Kerr, 31, in a violent rage at his flat in Clapham, south London, on August 15 last year.
During his previous arraignment in court,  Sylva said: “I did not mean to kill her. I had deep feelings for her. When I slashed the knife across her throat at that split second I thought I had a mental breakdown.”
Prosecutor, Oliver Glasgow QC, told jurors it was an all-too-familiar case of “sexual desire, appalling violence and desperate lies”.
He said: “He wanted to restart a sexual relationship with Simonne Kerr. When he did not get what he wanted, he could not control his anger and he exploded.”
Kerr, whose six-year-old son, Kavele, died of sickle cell disease, was part of the NHS choir B Positive on the ITV talent show.
Daily Mail reported that Kerr met Sylva through the dating app Tinder and arranged to visit his flat after finishing her shift at Guys and St Thomas’ hospital on the morning of 15 August.

According to the publication, Sylva attacked her in bed with a 20cm kitchen knife, slashing her throat and repeatedly stabbing her face and neck. Afterwards, he called 999 and said: “I’ve just committed a murder. I’m ex-army and I’ve got lots of mental health issues.”
Glasgow told the jury: “It is hard to imagine how terrifying the last few minutes of Simonne Kerr’s life must have been as she struggled to prevent the man who was supposed to care for her from murdering her.
“The moment she realised the man who had been pursuing her wanted more than a relationship and in fact wanted to kill her must have been utterly horrifying.”

The jurors also heard that Sylva, who served 10 years in the Royal Regiment of Fusiliers before being discharged on medical grounds had a history of depression, bipolar disorder, and post-traumatic stress disorder, and had problems controlling his temper.
During his trial, Sylva claimed that he and Ms.Kerr were just platonic, and even accused her of squeezing him for money for holidays and other luxuries as well as belittling him.
He insisted she had pulled a knife on him on the morning of August 15 last year because he was not giving her enough attention. The war veteran insisted he could not remember what happened between disarming her and finding her lying dead on the floor.
But Oliver Glasgow QC, prosecuting, told jurors Sylva was desperate for sex and 'when he did not get what he wanted he could not control his anger and he exploded'.
'Simonne Kerr did nothing to bring this attack upon herself,' he added. 'This was no loss of self-control brought about by his depression.
'This was anger that exploded out of him and which was vented on a defenceless woman. To use his own words, he murdered her.'
At his sentencing today, Judge Wendy Joseph QC jailed him for life and ordered he serve at least 21 years before he can be considered for parole.
Judge Joseph said: 'You have a personality prone to violence. The grief you have caused and will continue to cause is immeasurable.
'Simonne was simply a lovely person much loved by her family. I do not accept that this is totally out of character.
'You killed Simonne Kerr because you are a man with a violent disposition. When you cut Simonne's throat you could have intended nothing but death.'