Wike vows never to bow to anybody 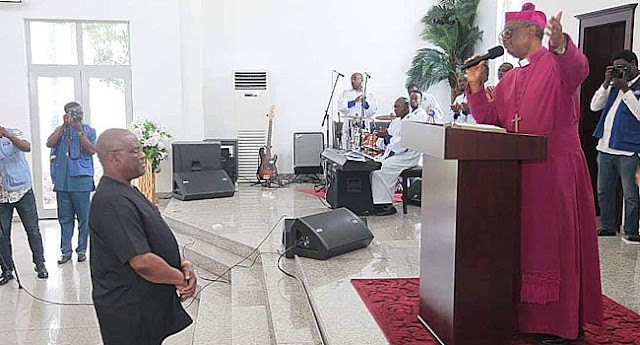 He said this on Friday when the Archbishop of the Anglican Province of the Niger Delta, Most Rev Tunde Adeleye, visited him at the Government House in Port Harcourt.


“I will not go to bow to anybody. I will defend the interest of our State. As far as God lives, this state will remain a Christian State, he said.
According to him, many politicians are easily swayed by circumstances and as a result, he only relies on God rather than trusting people.
As a politician, one group you must watch very carefully are the politicians. They are easily swayed.
“Something can entice politicians and they can change. If you watch what happened at the National Assembly, you can see that this is the attitude of politicians.
“You see a party has a position, then before you know it, they are selling out themselves for one plate of porridge. This one has a case and he wants them to withdraw the case.
“These things we know and we are guided about it. I will never let my guard down to say everybody is with me. The only person I can be comfortable with at all times is God.
“I don’t trust any human being. It is difficult for me to give 100 per cent trust that a man will continue to be like this or like that. The only person that cannot change is God.
He believes that with God, all challenges can be surmounted.
Speaking further, the Archbishop advised Governor Wike to remain vigilant in all his dealings.
He said, “The devil does not have any vacuum in his attacks. We know that quite a number of people have come to greet you, but we have a feeling to plead with Your Excellency that the guard should not be let loose yet.
A Thanksgiving Service was later conducted for his victory at the governorship elections.
Politics