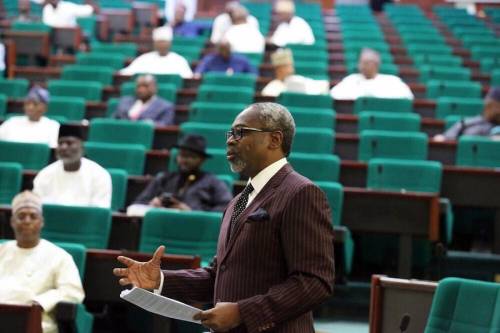 Despite attempts by supporters of the House of Representatives lawmaker, Femi Gbajabiamila, to deny the fact that the politician who is seeking to become the country's number four citizen as the speaker in lower federal legislative chamber.


He was found guilty by the US Supreme Court of Georgia in February 2007.
The Nigerian lower house is full of shady characters as espoused by a recent revelation by the Supreme Court of Georgia in the US. Saharareporters found out that On February 26 2007 the highest court in the state of Georgia ordered that Femi Gbaja with state bar number 288330 be suspended from the practice of law for 36 months.
The punishment for Femi Gbaja’s offence would have been outright debarment, however, he played dead before a full panel of the Supreme Court of Georgia led by Chief Justice Leah Ward Sears, before the court could rule on the petition from his client, he filed a petition for Voluntary Discipline, filed under bar rule 4-227(b) in which he fully admitted to stealing $25,000 from his client.
Femi Gbaja, as he was known in the case file accepted payment of $25,000 as a personal injury claims and deposited those funds in his attorney trust account in January 2003. He failed to disburse the funds to his client; instead he withdrew the funds, closed his practice and left for Nigeria where he ran for elections to represent Surulere I Federal Constituency in the Federal House of Representative under the banner of Alliance for Democracy (AD) in 2003. Upon arrival in Nigeria, curiously, Mr. Femi Gbaja added another name to avoid detection, he is known in Nigeria with a compound name “Femi Gbaja-Biamila”
A cursory look at his bio on the website of the National Assembly (www.nassnig.org) also betrays his crooked intention to avoid detection, while he gave his undergraduate degree college as the University of Lagos; his US education was shrouded in mystery as he claimed to have attended John Marshall Law School, USA. True, Mr. Femi Gbaja is a graduate of John Marshall Law School in Atlanta, Georgia and was admitted to the Georgia State Bar in June 2001 but in the United States alone there are two of such law schools, one in Chicago and another one in Atlanta, Georgia where Femi Gbaja graduated.

In the Georgia Attorney Directory, Femi Gbaja gave his address as 20, Mercy Eneli Street Surulere, Lagos. He is said to have refunded the clients money ($25,000) in 2006 and his lawyers have already submitted a certification of compliance of the Supreme Court ruling as of March 2007. Making him ineligible to practice law in the State of Georgia until February 2010.