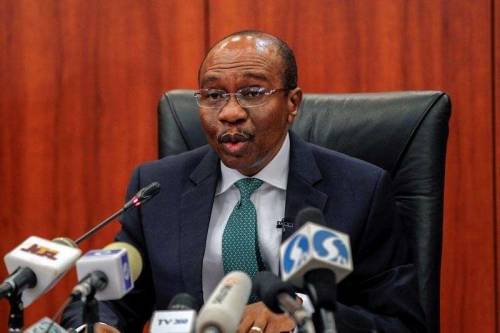 Godwin Emefiele, Governor of the Central Bank of Nigeria, has once again confirmed the authenticity of a report by SaharaReporters revealing that Emefiele and other top officials of the apex bank connived to conceal the N500 billion-scandal rocking the bank.

SaharaReporters had in May 2019 made public a phone conversation of Emefiele; his deputy, Edward Lametek Adamu; Director for Finance Dayo M. Arowosegbe including one of the Special Advisers to the CBN Governor, Emmanuel Ukeje discussing how to cover up the loss of over N500 billion stolen from the CBN in a private investment that went bust.
Two telephone audio tapes, exclusively obtained by SaharaReporters, revealed how the governor and top officials of the apex bank haggled over plots to conceal the loss of huge sums of monies in a Dubai investment, according to sources at the bank.
The CBN had previously said the audio conversation was genuine but no money was missing from the central bank.
Isaac Okorafor, Director Corporate Communications said: “The selective conversation being circulated was simply a discussion to ascertain why the auditors took that position and next steps to resolve it. Obviously, it soon became clear that a state government's loan cannot be classified as 'bad' or 'irrecoverable' when the state still exists and getting FAAC allocations.”
However, in a petition written by Emefiele to the Inspector General of Police, Emefiele once again confirmed that the audio was authentic and this time raised the alarm that his phone had been bugged as well as breach of security at the apex bank.
He also asked the Inspector General of Police to investigate the audio leak.
The petition, which was titled, ‘Security breach at the Central Bank of Nigeria – request for investigation’ read partly,: “it is apparent from the audio clips that my telephones including GSM and those of top officials of the Bank must have been bugged. This is no doubt a very disturbing development of monumental proportion and has very serious implications not only for the Bank as a central monetary authority but also the nation’s economy. It is also capable of tarnishing the image, good standing and integrity of the bank with the country’s development partners and eroding confidence in the economy.”
Emefiele asked the police chief to unravel how his phone was bugged and who released his phone conversation.
“I request you kindly use your good office to unravel the circumstances surrounding the bugging and wiretapping of the Bank’s telephones and the release of my private/confidential telephone conversation with other top officials of the CBN to SaharaReporters.
“Find out how Sahara Reporters obtained the illegal wiretapped conversation and culprits behind the illegal acts.”
Business