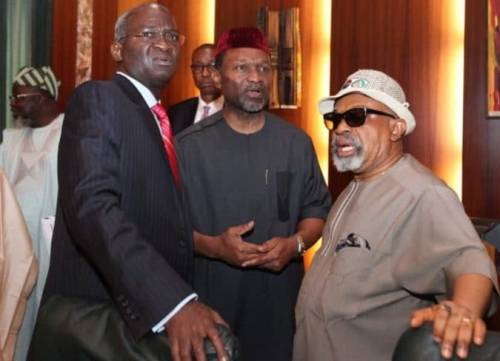 Nigerians have asked President Muhammadu Buhari not to include Chris Ngige, ex-minister of labour and employment as well as Adamu Adamu, ex-minister of education, in the list of ministers that would work with him in his second term in office.


Following the dissolving of the cabinet by President Buhari on the midnight of May 29, 2019, SaharaReporters conducted an online poll asking Nigerians to pick who they did not want President Buhari to be reappointed based on their performances.
The poll had the Minister of Power, Works and Housing, Babatunde Fashola; Minister of Labour and Employment, Ngige; Minister of Health, Isaac Adewole; and Adamu.
23,357 Nigerians participated in the poll with 40% of votes going to Ngige, while Adamu came next in the line for firing with 24%.
Fashola, whom many Nigerian had tipped to perform exceptionally as a minister, received fewer votes with 21% and Adewole got 15% of the votes.
Giving reasons for their votes, some Nigerians said the aforementioned ministers were not competent enough and could not surpass the citizens' expectations.
Many, however, said all the ministers should be dropped, urging Buhari to look for fresh minds and hands.
One of the commenters on the poll, @Oseni Fatai Oludare, said, “Minister for health, I've never felt his or her impact in a Nigerian government hospital or is it d negligence of d federal government on our health, very poor 0% tolerance.”
Another commenter,@Rasaq T. Zubair, claimed: “Ngige has outlived his usefulness. And the fella with the red beret must be rescued from further embarrassing himself.”
But@Lucas Xavier stated: “How is everyone not voting the unprofessional and uncouth health minister nor are we playing politics with incompetence.”
“They all contributed to the failure of this government... They should all drop themselves from the top to bottom. Nigeria is in dire need of a brand new government...,” asserted@Austeen Ojie.
@Friday Omobude wealth, however, pointed out: “All these ones are not ministers, they're kleptomanias. Besides, where is AMACHI (Amaechi) in this list? Ministers are supposed to be specialists and technocrats, not polithiefians.”
A fuming @KennethErhabor said, “Every single one of them should be dropped! Starting with the minister of darkness!”
@Omarbappah was even angrier that “Ngige, and Adamu Adamu kept me at home for more than 3 months of ASUU strike.”
Meanwhile, on Facebook, the same poll pitched Minister of Information and Culture, Lai Mohammed and Minister of Power, Works and Housing, Babatunde Fashola.
Of the 21,900 votes cast, Mohammed received 78 percent (17,100) while Fashola had 22% (4,800 votes).
Giving reasons for their votes, a Facebook user,@Balarabe Abdullahi, wrote: “I have chosen Lai simply due to his immense contributions that he gives on how to teach our children (younger generation) the easiest ways to spread lies in the society.”
“Nigerians suffers worst power outage throughout 4 years of APC rule under the watch of Hon. Minister of power Babatunde Fashola who have been providing PHCN with all forms of shelters and protections from being prosecuted by PMB,”@Aminnew pointed out.
“We pray and hope that God will expose and humiliate PHCN with all their affiliates in this political dispensation known as NEXT LEVEL.”
Another Facebook user, Mhizta Francis Chukwuneme, said: “Lai should be dropped immediately that man doesn't know how to talk...I think Fashola needs time, even though we haven't seen his work but I believe he isn't sleeping.”
Itodo Itodo claimed: “Lie Mohammed... That man is just disgracing us that are bearing Mohammed anyhow.”
Liye Anthony Dallah: “Fashola is a complete failure, the electricity situation in Nigeria today is much worse than when he came onboard. I don't even want to talk about his other two portfolios. No be by English and grand standings. Oh… By the way, what business has a lawyer with power? This is the second time that a SAN was made Minister of Power, the first one (Bola Ige) was killed by power, the second one (Fashola), killed power.”
“Let Fashola go. If the provision of housing and power is his mandate, then he has failed woefully. I have little or no business with Liar Moh'd. I don't need his information. To me, that Ministry should be scrapped, the presidential media aides are taking care of that,” said Yakubu Musa.
@Smart Olufemi said: “All of them! They haven't demonstrated an atom of competence.”
Features Opinion