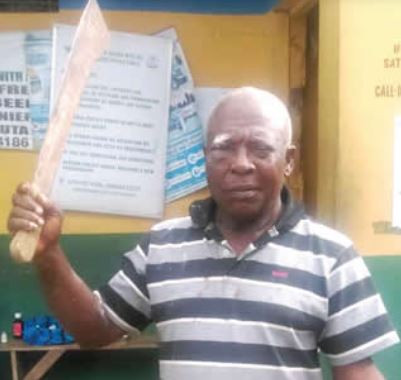 The presiding magistrate, Mrs A.O. Komolafe, ordered that the farmer should be kept behind bars pending when he would be able to perfect his bail conditions. Obrifor, who lives in the Okokomaiko area of the state with the victim, on Friday June 7, chopped off Amaechi’s hand with a machete for allegedly attempting to steal fish in his (Obrifor’s) pond.

The incident was reported to the police and the sexagenarian was arrested. “The victim was rushed to the Igando General Hospital. The suspect alleged that he saw the victim around his fish pond and thought that he came to steal his fish and that was why he attacked him. Investigation is ongoing and the suspect will be taken to court,” the Police Public Relations Officer in Lagos, Bala Elkana, had said.

A police prosecutor, Inspector Chinalu Uwadione, brought Obrifor before the court on four counts bordering on attempted murder, grievous harm and unlawful assault. Uwadione told the court that the defendant committed the offences on June 7, around 8.40pm, at 14, Issa Ibrahim Street, Okokomaiko.

Uwadione alleged that the defendant used a machete to chop off the right hand of the boy, whom he suspected to have entered his compound to steal his fish. The offences, according to the police, contravene sections 173, 230, 245 and 246 of the Criminal Law of Lagos State, 2015.

The defendant, however, pleaded not guilty to the charges and elected summary trial. The Chief Magistrate, Komolafe, admitted him to bail in the sum of N1m with two sureties in like sum. Komolafe said the sureties should be gainfully employed and must be blood relations of the defendant.

She added that the sureties should show evidence of three years’ tax payments to the Lagos State Government. The case was adjourned till July 31, 2019.
News