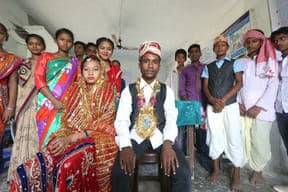 The United Nations Children Fund (UNICEF), has said all husbands in the world - 23 million - were married before their 15th birthday.


In a press release published on its website, the child focused organization said data obtained from 82 countries revealed that a total of 115 million boys were married off before they turned 18.
“Early marriage brings early fatherhood,” Henrietta Fore, Executive Director of UNICEF said.
“And with it added pressure to provide for a family, cutting short education and job opportunities… Marriage steals childhood.”
The statistics said the Central African Republic has the highest number of teenage husbands in the world, with 32,200,000.
Nicaragua has the first runner-up spot with 21,250,000 and Madagascar second runner-up with 14,950,000 husbands marrying at a tender age.
“As we mark the 30th anniversary of the adoption of the Convention on the Rights of the Child, we need to remember that marrying boys and girls off while they are still children runs counter to the rights enshrined in the Convention,” Fore said.
“Through further research, investment and empowerment, we can end this violation.”
With this first in-depth study into the prevalence of child grooms, the number of children married off at an early age is now 765 million.
Child brides remain disproportionately high, with one in every five girls aged 20 and 24 married before they celebrated 18 years on earth and one in 30 men starting a family before the same age.
According to UNICEF, child brides and grooms come from the poorest homes and have little education. Data for the study was obtained from the UNICEF Multiple Impact Cluster Surveys (MICS) and the Democratic Health Surveys which are supported by the United States Agency for International Development (USAID).
Features